Junro Okumura wished to show a part of the city where men and cats lives together in symbiosis through the pictures he proposed for his project presented in Neko project. A special project to arise our consciousness about the changes in Tokyo city but it could be true in any big cities of the world. Let’s discover this unforgettable project:

Nowadays cats disappears in Tokyo City. They are losing their territories at the expense of the successive new building developments in the city, and one could give several other reasons such as the natural decrease due to the numerous sterilization campaigns. Nevertheless with the organization of the Olympic Games in Tokyo, the speed of those new urban developments has accelerated. What used to be a bed for cats only yesterday becomes a vacant field the next day ready to be transformed, and the opportunities to see this kind of scene are more and more frequent.
However, in this Tokyo there are barely a few places where cats and men live in symbiosis naturally even today. The pictures presented by Junro Okumura present for our happyness is this kind of place, the downtown area called “Shitamachi”, in the west of Tokyo. In this neighbourhood, cats and men are important partners. In the prints of the floating world from the Edo period after the 17th century, it can be said without exaggerating that the silhouette of cats has always been part of the scenery printed in those art works.
Shitamachi was repeatedly reduced to ashes by the large, frequent fires during the Edo period, and devastated during the “great kanto earthquake” in 1923. Then it burned down completely during the bombing of Tokyo in 1945. At that time, people rebuilt the “paper and wooden houses” which were part of the Japanese tradition, and from there until today this neighbourhood Shitamachi continues to feed the nostalgia of the Japanese and has kept its life of yesterday. And the symbol of this atmosphere is the cat.

But the wave of new developments in the city came to visit the shitamachi too. Junro Okumura thinks that a lot of places published in his photo collection should be gone in 5 years. 75 years after the Second World War, most of the paper and wooden reconstructions of this period reach their physical limits.

Japan is a country of volcanoes and in the next 30 years, the risk that Tokyo will suffer an earthquake is 30%. Faced with a government and property developers urged to put forward the question of security as a theory of redevelopment, nostalgia is no longer an effective argument.
Junro Okumura states: « Soon, the cats will probably disappear from the city of Tokyo. There are only 5 years left, and until this day arrives I will record the place where cats and men lived with happy hearts. »

It shows the importance to have photographers such as Junro Okomura to pass those images on to the next generations. 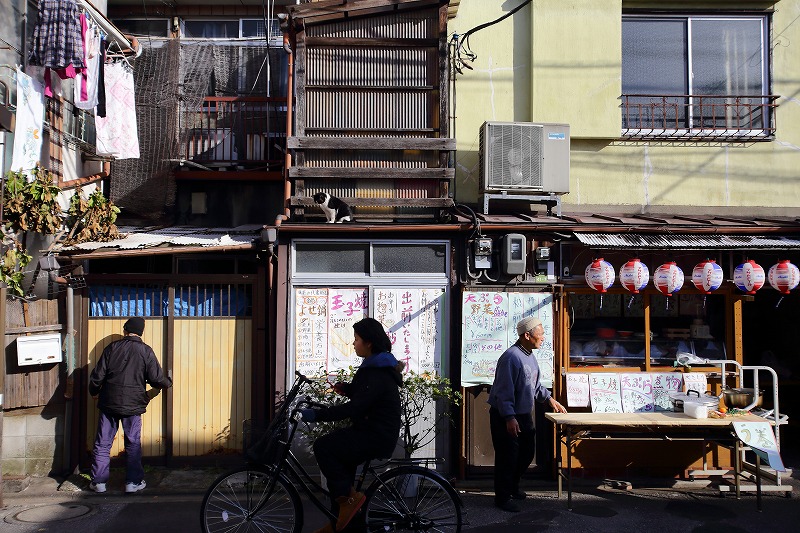 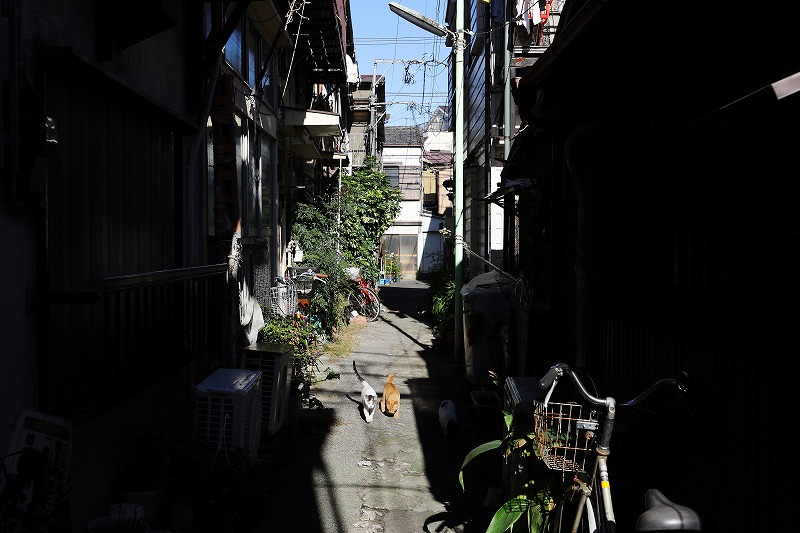