In her Neko project, Yuko FUKAGAWA presents a very cinematographic color photo, where cute kittens queue as customers in the front of a Japanese izakaya (a sort of equivalent bistro we may have in France). We are in February, a very cold month in Japan. The kittens stand as close as possible from each other to endure the cold. In the izakaya a man is cooking yakitori (chicken skewers) and the « oishi oishi » (tasty) smell attracts the kittens. The Japanese culture is present with the wooden boards where are written the menus of yakitoris, all bathed in this warm and colorful light so particular to Izakaya places.
Yuko comments: ” I took this picture fascinated by the kindness of the restaurant staff who seem to protect the kittens who fight the cold with all their strength to survive.”
Another black and white photo also evokes a lively district in Japan. Two photographers are kneeling to photograph cats in front of a Korean izakaya where cats live, a living proof of the present popular cat photography in Japan.
Yuko smiles and says: ” I find it humorous to see these photographers bounding their bodies to place themselves at the level of the cats.”
Yuko FUKAGAWA starts with scuba diving photography. In 2009 she got interest in cats and their own particular. She only takes photography of Tokyo cats and is a member of the group – Tokyo Neko Iro like other participants such as Yomogi KAWAI.*

You will find here additional pictures of Daisuke ATSUMI provided to his initial proposal.
“I took them after deciding to participate in the Neko Project. I did not make them specifically for this project but it happens that I managed with these photos to get even closer to the work that I wanted to achieve and that I imagined in my head.”
In addition to cats, he also photographed railroads, kingfishers, and occasionally fighter jets, among others. Daisuke ATSUMI doesn’t intend to convey any message but tries to materialize into a photograph, an image that floats in his head, using a model that suits the photographer.
“If I had to express myself as a cat photographer, I would simply say that the cats who live in our neighbourhoods outside, live in very difficult conditions and I wish everyone could know how much the world they live in can still be beautiful. Human beings sometimes ignore the beauty of these landscapes and to have a cat in the picture make us turn our eyes on this beauty. My objective is whatever not to show the difficulties of living of those cats but to make in the end an original photo including the beauty of our world without using any artificial additional tricks, just taking the benefit from a beautiful natural light.”

Yumi Sato started photography five years ago.
“I’m now a photographer and I love animals! I take photos of cats outside and inside Tokyo. I wish to share with you, through my photos, the feelings, at a given moment, of these “little ones” who do not speak the language of humankind. The photos that I proposed for the Neko Project, I chose them among those that I have taken continuously since 2013 under the title “Dote neko” (the cats of the bank). These cats live on the banks of Kasenshiki in Tokyo where I like to go for a walk to meet them. In this green and vegetal world lives the memory of all cats belonging to this place. I am interested in simple things like everyday life encounters and things that constitutes the “Lifework” (work of a whole life). I share my life with “Ichi” a ” sotoneko” (an cat from outside).”
Since 2017 Yumi Sato is a also member of the group Tokyo Neko Iro Each of her photos has a title and is embellished with a legend that tells the story of the picture of those cats she knows so well.

Koji Ono presents his photo called “Night”. First look brings a smile. Both a girl and a cat stray in the street wearing white socks. The unexpected encounter. Looking closer, the photographer remembers this cat living in this neighbourhood but with sadness. That cat’s brother was later murdered by a crazy person. If I look at the information I have left on the picture, I see that at the time I used to take a mirrorless Panasonic camera to which I added a Nikon lens (which I liked a lot).
I used to take photos of dogs before but under the influence of my wife who loves cats, I change my subject. I find them « kawaï » and collect their photos as beloved images. What Koji Ono wishes to transmit to viewers is his love for cats and photography. 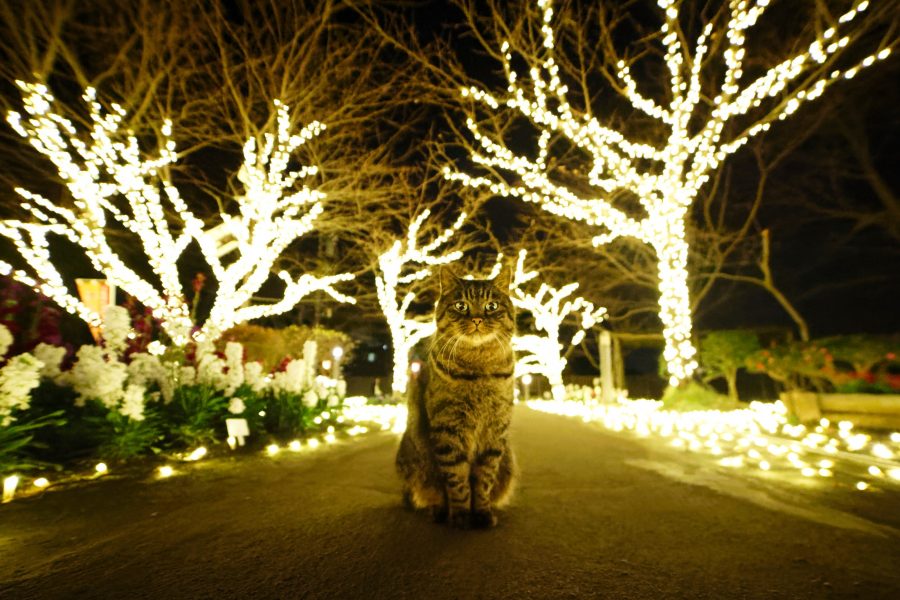 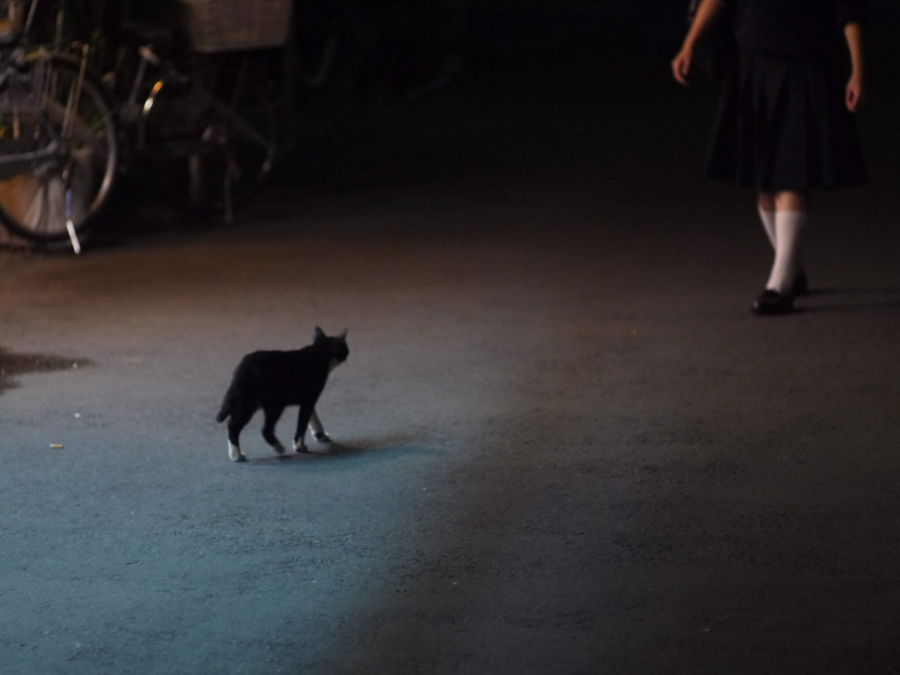 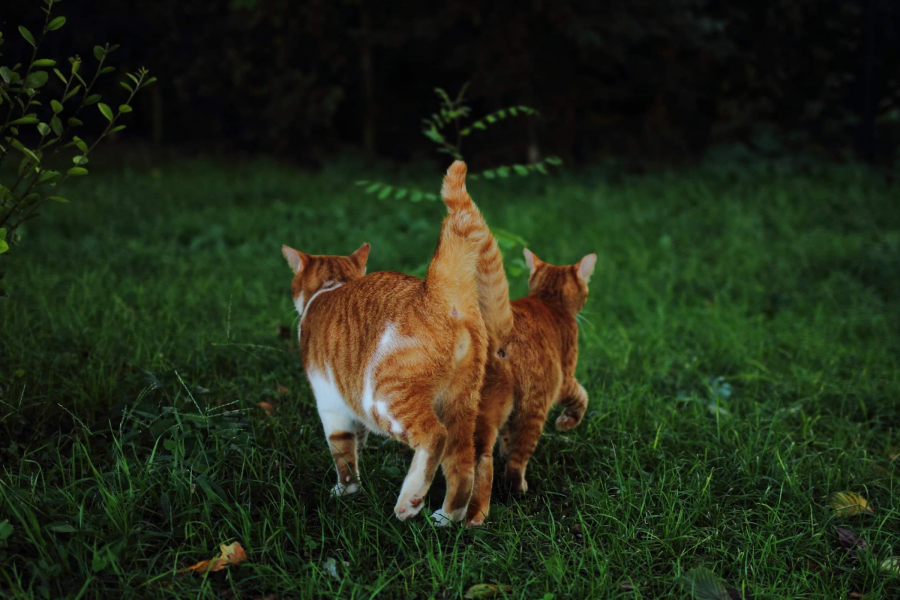 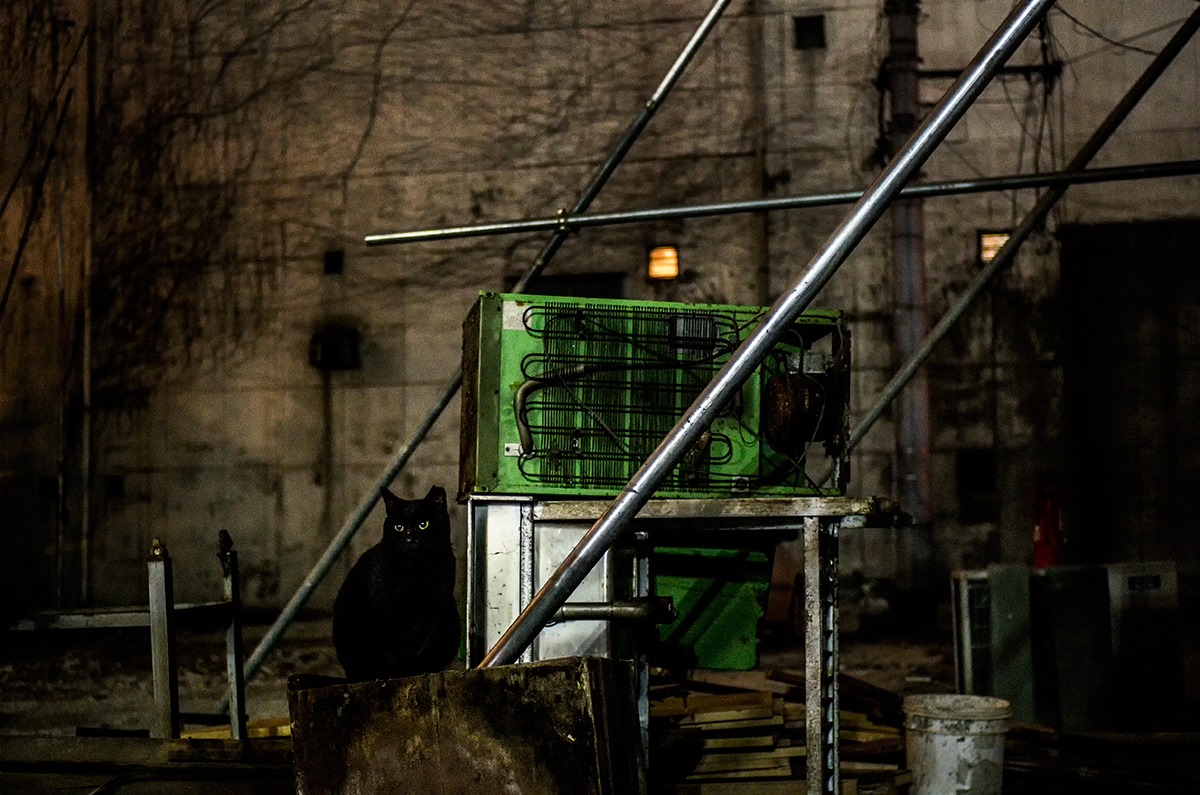 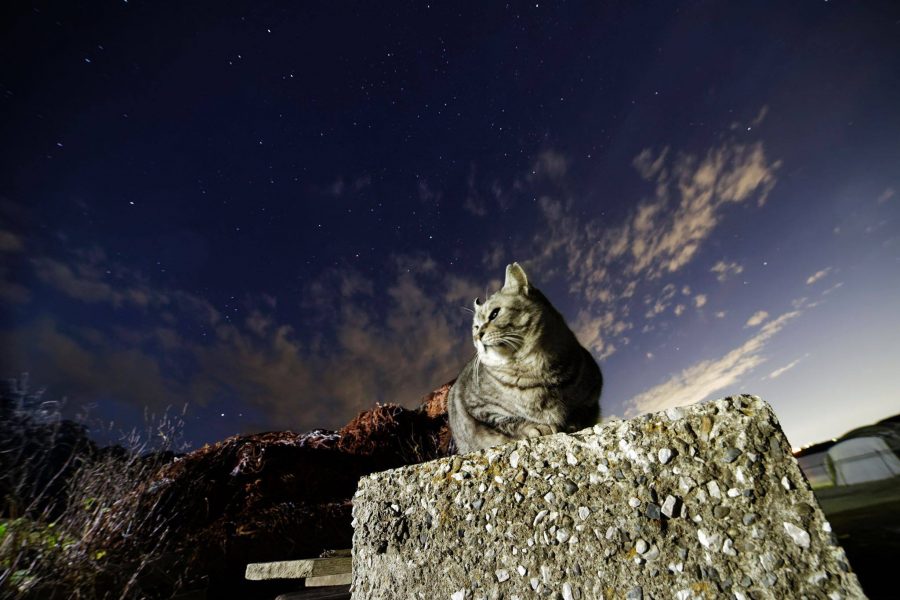