« Twin » cats
Both cats show their faces at the same time over the top of the house wall in front of my older sister’s house. Apparently they are not residents from her neighbours’ home, they are stray cats. But the neighbours fed them and were taking care of them. They even found names and gave them love. On the left part of the photo, the cat has been called Miki and on the right Chacha (this cat is brown and in Japanese “cha” means “brown”). They were often together and once I was on a visit to my sister, I noticed that they were both side by side on the wall just showing their little heads. I hurried and pressed the shutter button.
I had rarely seen two cats together who got along as well as those both stray cats. « Like twins or sisters ». They are now living together in paradise… for ever. 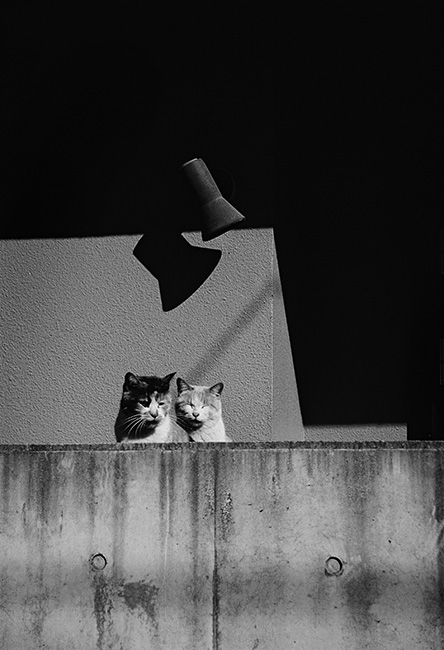 A cat taking a sunbath
Once I met a cat when I was walking in my previous neighbourhood. It was in the street next to the local hairdresser, where there was a sunny corner with several flower pots, where I used to pass by from time to time. Very often there some cats were sitting in the sun, in fact bathing sun each of them in the pose that suited them, from sitting to lying on their whole length or sleeping in a ball. They were enjoying the street, defenseless, belly offered to the sky in extreme positions. This is not something you see very often.
The most surprising was that they were camped at the sunniest place of the street, all day, with a sense of satisfaction savoring this moment of happiness. Without even thinking, I approached one once and said, “Let me take a picture of you.” With cats, from time to time I use the “keigo” (polite form of the Japanese language).
A cute pose with this look saying you would be stupid if you don’t realize the happiness of this moment? After taking this picture, I went home and had a good sunbath belly offered to the sky. 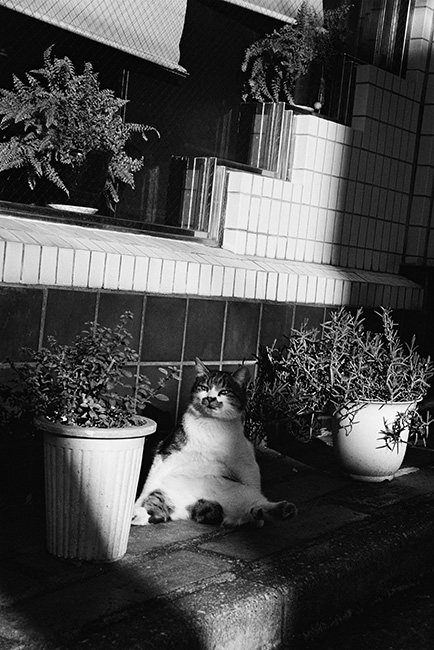 Pimlico
The only cat I got was left by its first owner who for some reason could no longer take care. I became its host family. Its name was Pimlico. Apparently its former master chose this name from a London subway station. I do not know more about this choice but probably because it sounds very cute.
Pimlico has been since I live alone the first and the last cat that I ever had. I got him back when he was 8 and Pimlico lived until he was 21 years old. A 8-year cat is already an adult and did not get attached to me as a kitten would have done from the beginning. Once past the time when we were both intimidated by each other, we became two adult accomplices. In this above picture we see Pimlico taking a nap peacefully on my bed.
I would like again to put my face into this fur that smells so good, this particular clean smell of cats … If I tell you this story, it is because Pilmico was my first and my last cat as I currently live in a building where animals are prohibited … 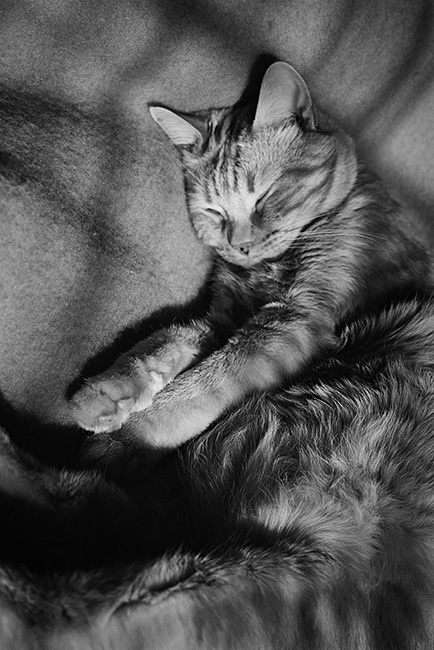